In partnership with Swim Pony Performing Arts, TrailOff is a new mobile app designed to re-imagine how we interact with recreational trails and, by extension, expand the diversity of users that seek them out. The core of the project lies in the creation of 10 unique sound walks: intimate journeys that use GPS to link audio storytelling to physical attributes along a mapped route. Each selected path will feature writing from a local artist along with underscored music and sound design, all tailored to sync to the movement of an audience member as they travel along a trail.

Audiences will experience these intimate journeys through the TrailOff app, developed by Toasterlab, which uses GPS triggering to link audio to specific geography as users walk the mapped routes. Phone sensors will also prompt subtle variations dependent on weather and time of day, tailoring each experience. The stories have been created uniquely for each trail site with scenes narrated by beloved local performers and underscored with music and atmospheric sound design crafted by Michael Kiley. After each walk, additional content is available in-app including podcast-style interviews with writers and points of environmental and historic interest on the trail.

afaq is a philly based daughter, with grandmother tendencies. assembled in yemen (from sudanese parts) afaq considers herself a global citizen of her own country. this international award winning poet, museum exhibiting photographer, activist, and educator seeks to love the world until it loves her back. she has collaborated with Netflix, Pen America, Beautycon Media, Poetry Out Loud, the Barnes Foundation, and several universities including NYU, Columbia, and UPenn. Continuously targeted and previously arrested for her activism, afaq uses her art, experiences, and the violence she has witnessed to combat injustice while spreading messages of empathy and change. She’s writing for Camden’s Gateway Park.

Carmen Maria Machado is the author of the memoir In the Dream House, the graphic series The Low, Low Woods, and the short story collection Her Body and Other Parties. She has been a finalist for the National Book Award and the winner of the Bard Fiction Prize, the Lambda Literary Award for Lesbian Fiction, the Lambda Literary Award for LGBTQ Nonfiction, the Brooklyn Public Library Literature Prize, the Shirley Jackson Award, and the National Book Critics Circle’s John Leonard Prize. In 2018, the New York Times listed Her Body and Other Parties as a member of “The New Vanguard,” one of “15 remarkable books by women that are shaping the way we read and write fiction in the 21st century.” Her essays, fiction, and criticism have appeared in the New Yorker, the New York Times, Granta, Vogue, This American Life, Harper’s Bazaar, Tin House, McSweeney’s Quarterly Concern, The Believer, Guernica, Best American Science Fiction & Fantasy, Best American Nonrequired Reading, and elsewhere. She lives in Philadelphia and is the Abrams Artist-in-Residence at the University of Pennsylvania. She’s writing for the northern portion of the Schuylkill River Trail.

Denise Valentine was a Master Storyteller, historical performer, consultant and founder of the Philadelphia Middle Passage Ceremony & Port Marker Project. Valentine was a storyteller of forgotten and neglected histories of the African Diaspora with special emphasis on the early history of Pennsylvania. Her workshop, Historytelling, integrated archival research, folk heritage and oral history to demonstrate the role of the expressive cultural arts in creating sustainable communities. Additionally, Denise worked as a program facilitator for the Museum of the American Revolution and served as advisor to the curatorial team of the new Early American Art Galleries of the Philadelphia Museum of Art opening in 2020. She wrote for the Tacony Creek Trail.

donia salem harhoor is an Egyptian-American co-conspirator with her 12-year-old cub. ED of The Outlet Dance Project, she is an alumnus of the Community of Writers, Urban Bush Women’s Summer Leadership Institute, Open Mouth Poetry Retreat, and several Winter Tangerine Review & Speakeasy Project workshops. A principal dancer and choreographer with Sakshi Productions, she is part of the Brown Girl in the Ring Collective. She was a 2016 artist-in-residence with Swim Pony. Her poetry has appeared in Anomaly, Ballet Review, and Sukoon magazines. donia believes fervently in game nights. She has her MFA in Interdisciplinary Art from Goddard College. She’s writing for the Perkiomen Trail.

Eppchez ! (Ep-chez Yes) is a Quaker, gender expansive, Cuban & Jewish theater maker, musician, and designer. In 2012 Eppchez started up Alma’s Engine; a process focused production company/creative ministry developing eir new work across a variety of genera and medium; spreading whimsical and earnest dis-ease. Ey also collaborates with several other Philly theater companies as a performer deviser, choreographer and writer. Eppchez is also the founder of Darb Garb, making soft wearable sculptures for gender adventuring bodies in need of other lumps. Ey are writing for the southern section of the Delaware River Trail.

Erin T. McMillon is an urban horror and suspense author, blogger, and artist, from Trenton, N.J. Her work has been viewed and purchased by readers and curators from around the world. She is the author of several books (What’s Hiding in the Dark?: 10 Tales of Urban Lore, They Eat: An Episodic Zombie Thriller, and The Abducted), with a forthcoming release, Simone, to be released in the fourth quarter of 2019. Erin can be found on Facebook and Instagram @TheLadyWrites82 and on Amazon @erinmcmillon. She’s writing for the D & L Trail.

Jacob Camacho is a CHamoru writer, educator, and activist born and raised in Guåhan, Islan Marianas. He received his Creative Writing MFA from Rutgers University, Camden. He is an alumni of The University of Guam and UCLA’s Extension Writers Program. He’s a Lead Teacher at All Things Are Possible, Foundation in Willingboro New Jersey and Lead Educator for the Move Mountains Project 501 (c)(3) in San Luis, Colorado. He’s a former English Teacher at Philadelphia’s alternative high school, CADI, and NJ’s YMCA of Burlington & Camden Counties’ Academic Coach. His short story, Proclamation, appears in University of Guam’s Storyboard 18. Half-Moon is featured in Philadelphia’s MadHouse Magazine Volume 4. His poem, Kao siña hao fumino’ Chamoru?, is in University of Hawai’i Press’ Indigenous Literatures from Micronesia. He’s writing for the north Delaware River Trail.

Jacob Winterstein is an artist, event producer and educator from Philadelphia. Through performance art, poetry and events, Jacob’s work explores how we have been separated from and how we can joyfully connect with each other and our environments. Jacob is the co-founder of The Philly Pigeon collective which organizes, poetry slams, multi-media productions, workshops and artists retreats. Jacob is currently attempting a pilgrimage down every block in Philadelphia, asking people “when life is difficult, how do you feel better?” and towing their answers on a mobile altar. He’s writing for the Heinz Wildlife Refuge.

Li Sumpter, is a mythologist and multidisciplinary Philly-based artist. She uses world-building, D.I.Y media, afrofuturism and gameplay strategies to cultivate eco-awareness and community action around the “art of survival”. Li’s artistic practice and collaborative design initiatives address existential threats to mind, body and spirit through speculative tools and sustainability projects that illuminate symbols and patterns of change. She was the 2017 Artist-in-Residence for Haverford College’s Urban Ecology Arts Exchange and the 2018-2019 Leeway x NextFab Art and Technology Artist-in-Residence. Li strongly believes in hope and the power of myth as a catalyst of personal and collective transformation. She’s writing for the Schuylkill River Trail at Bartram’s Mile. 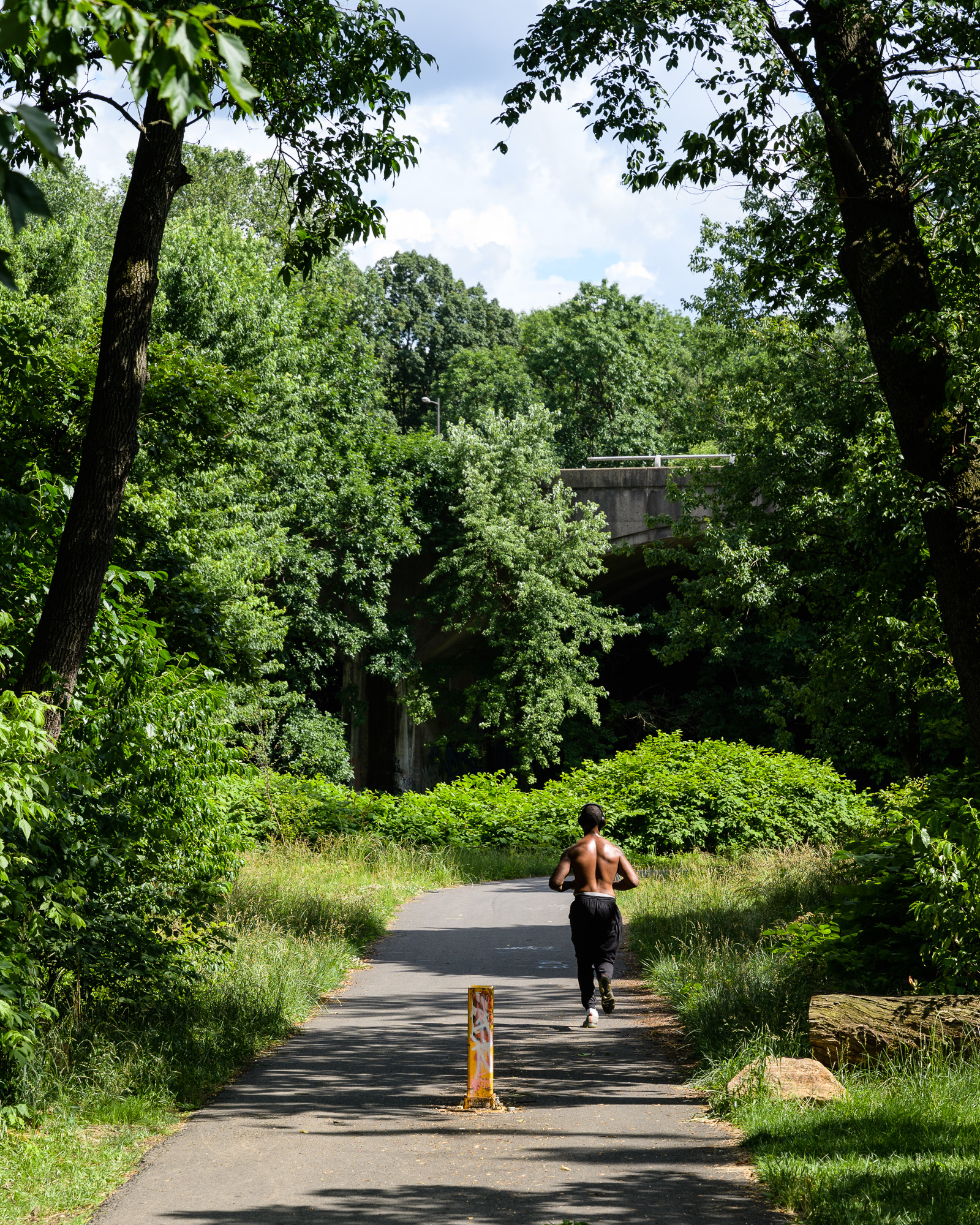