Oh, What a Lovely War!

For this project, Toasterlab coordinated the use of Motion Capture for the creation of the John Bull avatar, and produced the digital content used across the show.

A clownish look at the foibles of combat, Oh, What a Lovely War! is a musical satire that questions humanity’s glorification of battle and the cycle of violence.

This modern staging takes a classic, World War I-themed play and places it firmly in 2020, within the world of gamers and mega-violent video games, to force a look at how we pass along war-like thinking to the next generation.

This show is presented in association with Hart House’s 100th Anniversary and salutes the House’s historic connection to the military efforts of the Great War.

Audience seating in 430-person theatre with proscenium stage. Projection screens were positioned as full upstage backdrop and with side panels midway down stage. The virtual motion-captured John Bull avatar, as well as many other images and video footage, were projected onto screens. Side panels supported the production’s video game design concept. The play was presented as a series of vignettes, slightly altered from the original script.

Autumn Smith’s work with Oh, What a Lovely War! began as her Master’s thesis project at York University. When given the opportunity to remount the show at Hart House Theatre, she wanted to incorporate more digital components to it, both as a way of engaging with contemporary discourse on video games, and because she wanted to work with technologies with which she was unfamiliar. According to Smith, the terror of the unfamiliar excites and catalyzes creative energy.

As Smith was not familiar with the technology being used in the production, conversation between the creative team and the technical team became very important. Access to equipment, rehearsal space, and time were limited, and as a result some of the more ambitious technical components had to be scrapped from the final project.

Smith, in retrospect, thinks of this project more as a workshop performance than a final, polished piece. Oh, What a Lovely War! is best understood an experiment around the implementation of digital technologies in a live theatre context. 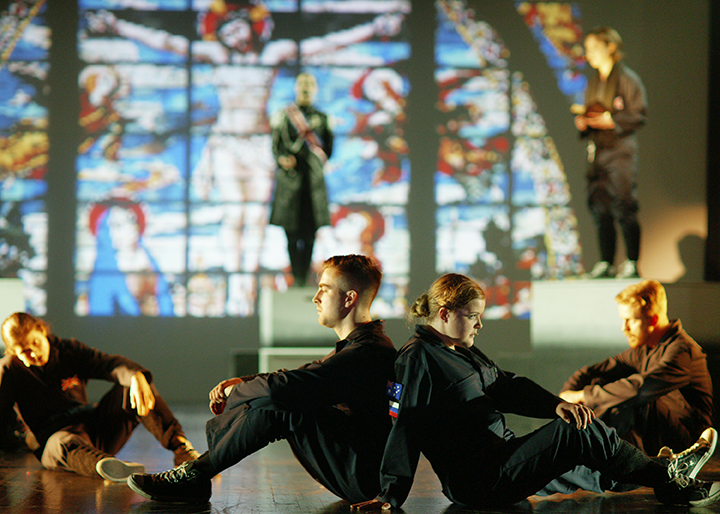